The Gulf State Park Lodge could be described as a “hospitality project promoting ecotourism” or a “restoration project offering hospitality” with equal accuracy. And that’s exactly the point.

The natural beauty and diverse ecosystems of Alabama’s gulf coast make it a sought after destination for humans and animals alike. Gulf State Park has over 2 million human visitors each year, and an estimated 2.1 billion birds migrate through the landscape. Monarch butterflies visit the park to refuel before or after crossing the Gulf of Mexico, and sea turtles come to nest. In 2016 the North American Coastal Plain was named the world’s 36th biodiversity “hot spot”, in recognition of the abundance of endemic species, and the severity of habitat loss. However, this biodiversity is largely underappreciated in the public imagination. While tourism is the engine of the gulf coast economy, for many visitors the destination has been reduced to a beautiful but superficial experience of white sand and a sunset. With over 6,100 acres and 7 unique ecosystems, Gulf State Park is a refuge of biodiversity, and also a unique economic asset for the growing eco-tourism market. 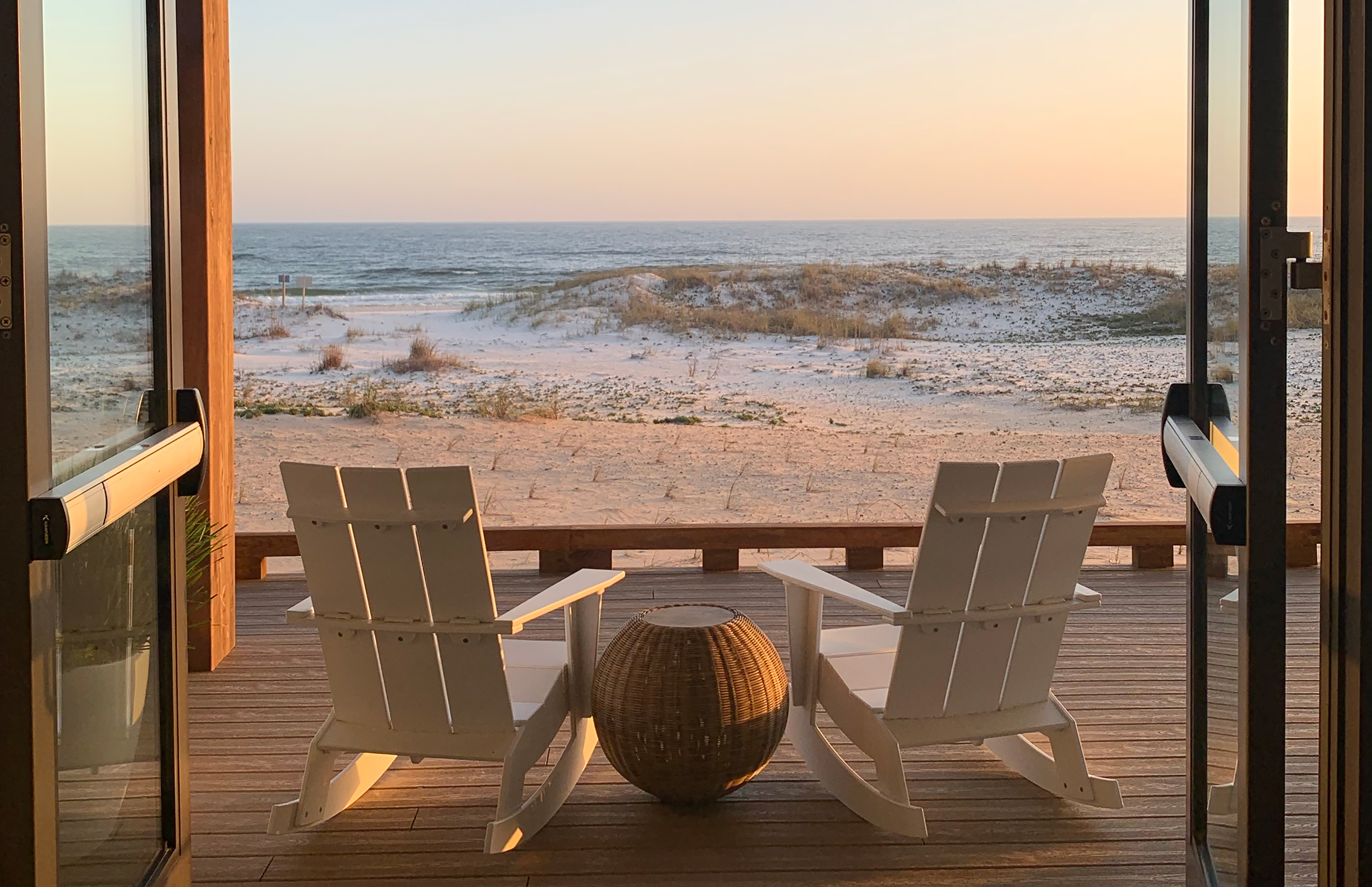 The original Lodge at Gulf State Park was located close to the water, directly on top of the primary dunes. The lodge and the dune system were wiped out by Hurricane Ivan in 2004. In 2010, the BP Deep Water Horizon disaster flooded the gulf with oil, and tar balls filled the beaches as tourists fled them. The resulting economic devastation made it painfully clear to residents of the Gulf Coast that the economic health of their communities is inextricably linked to the health of coastal ecosystems.

The Gulf State Park Project was conceived in response to these disasters with an ambitious vision to create “an international benchmark for economic and environmental sustainability, demonstrating best practices for outdoor recreation, education and hospitable accommodations”. A comprehensive Master Plan for the park helped to translate that vision into concrete guidance for future development. The Gulf State Park Lodge was the first completed project of the master plan, achieving SITES Platinum, LEED Gold and Fortified Commercial certifications.

The SITES Rating System is focused on restoring and enhancing ecosystem services, which made it a natural fit for the lodge site. The site had been disturbed by the development of the original lodge buildings and non-native landscape in the 1970’s, then literally turned upside down by Hurricane Ivan and subsequent demolition activities. During the Integrated Design Charrette that kicked off the design of the new Lodge, an unusual metric emerged. Amongst intense discussions around energy use intensity, carbon footprinting, stormwater treatment volumes and sustainability certification, a simple and succinct measure of success stood out - the new lodge should maximize life per square foot.

Our team appreciated how the structure of SITES encouraged an inclusive definition of ecological restoration, addressing the mental, emotional and physical restoration of human visitors to the landscape. This approach connected the dots between our ambitious ecological and economic goals. The new Gulf State Park Lodge needed to not only restore ecosystems, but also attract visitors to experience and appreciate those ecosystems, in order to achieve economic sustainability. 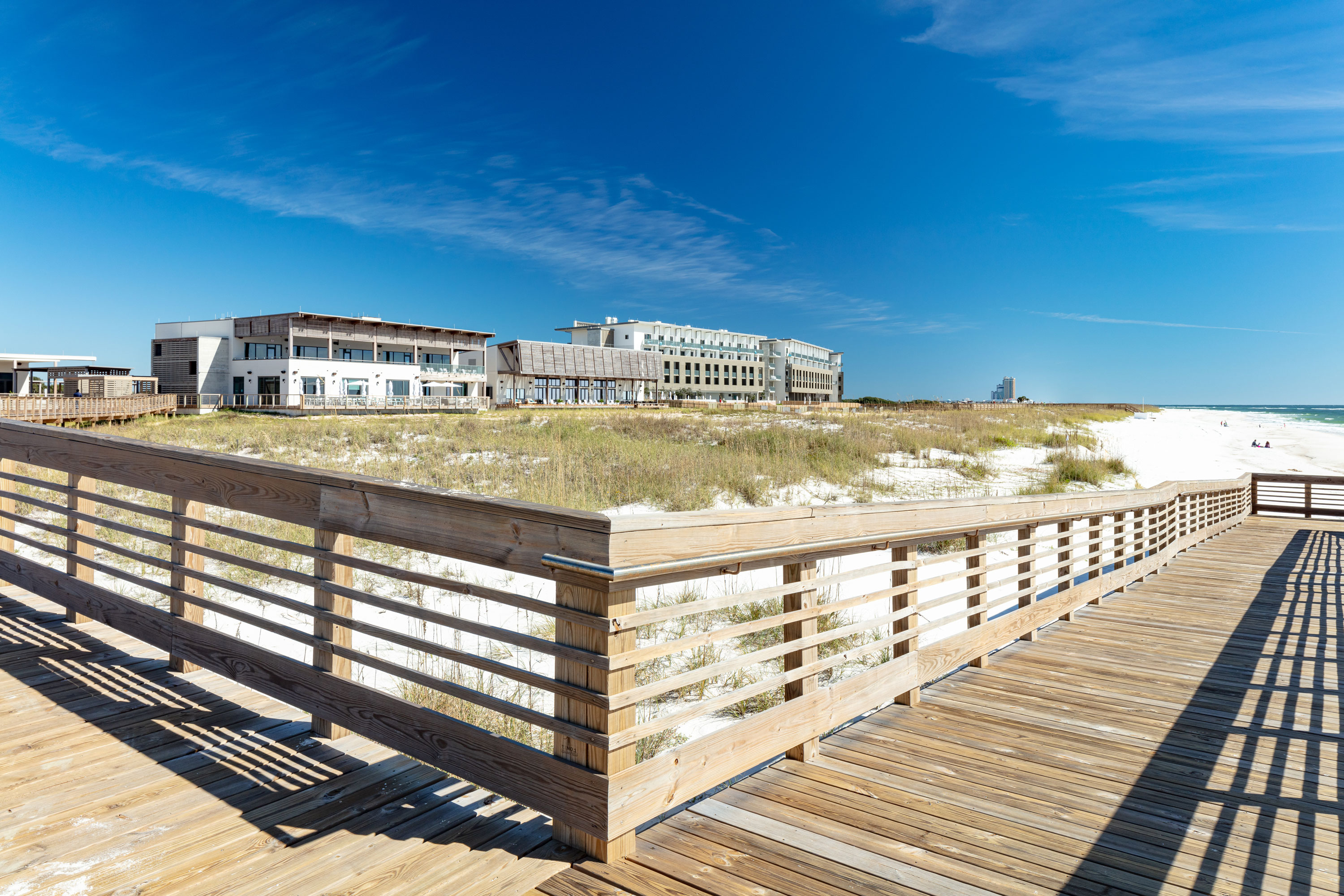 The design of the Gulf State Lodge demonstrates resilient infrastructure that is in fact a functional amenity. A restored dune-scape provides protection from hurricane driven storm surge. Pervious parking lots and verdant wetlands buffer flooding caused by increasingly powerful summer storms. Adaptive comfort strategies such as shady porches and natural ventilation allow the buildings to be habitable as temperatures rise, even when power fails. “Functional amenity” doesn’t quite capture how each of these moves create beauty, pleasure and enhances the experience of each visitor to the Lodge. With a wink to Bjark Ingels, this approach might be more aptly named “hedonistic resilience”.  Many guests won’t be aware of the technical design moves that resulted in LEED, SITES and FORTIFIED certifications, which is fine with us. But we hope that all of the guests, including the sea turtles, beach mice and birds that share the coast with us, will enjoy the results.

On September 15, on the 16th anniversary of Hurricane Ivan’s landfall, Hurricane Sally subjected Gulf State Park to over 12 hours of category 2-3 winds, rain, and storm surge. The resilient design of the Lodge allowed it to serve as a shelter in the storm for park employees, reporters and recovery teams.  Please join us on the SITES community call in December to hear more about this SITES Certified Platinum project from the landscape architect, Kate Tooke, Sasaki Associates, and the Sustainability Consultant, Rebecca Dunn Bryant, WATERSHED